To make the freeware more useful, you can add it as an item in the right-click context menu or add it into the Send to menu item of context menu.

Hash values are the unique string values that are associated with one file. Two different files can’t have the same hash values. Comparing hash values of files is an easy and quick way of finding if the files are same. This technique is useful for checking the integrity of files downloaded from internet.

SendTo MD5 is a good MD5 hash generator to choose for finding out the MD5 hash value of files, quickly and easily. And same goes for checking file integrity (by comparing two hash values). The freeware mentions that it uses one worker thread for all the files in the queue, instead of running separate threads for every single file. So, it uses less system resources. 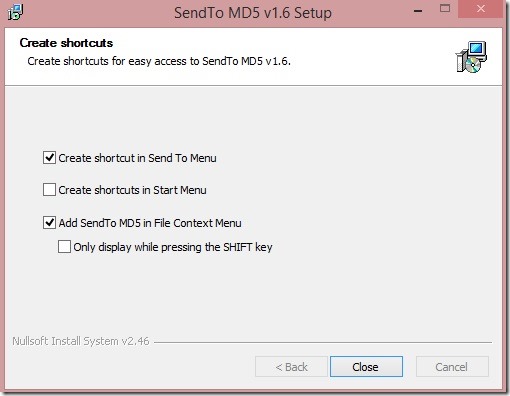 SendTo MD5 is a simple, fast, and easy MD5 hash generator. It’s size is very small and installation is easy. You can run it by going to the freeware’s folder inside the C drive. To make the freeware more useful, it gives you shortcuts to quickly run it and generate-compare files MD5 hash values. While installing, the freeware asks you for enabling these features by adding SendTo MD5 exe into the right-click context menu. Simply enable them. 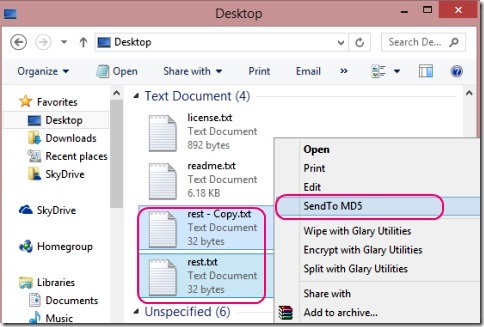 Another way of quickly generating MD5 hash value is select, drag, and drop files into SendTo MD5. Simply select the desired files and then drag-drop them in the SendTo MD5, or right-click on selected files and click on SendTo MD5. The freeware automatically generates the MD5 values. You can then click on Compare button to check the two MD5 values. This MD5 generator uses different colors to show the results. 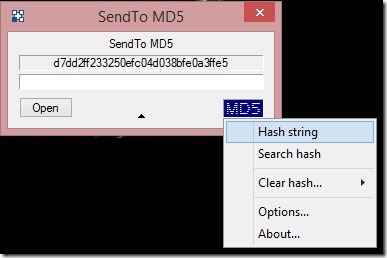 Besides these, the freeware has some other features. You can also generate a MD5 benchmark. Add the files, press Ctrl + B keys, and select file. The freeware auto generates benchmark showing the MD5 hash value, file size, hash computation speed, and time taken to compute the file. 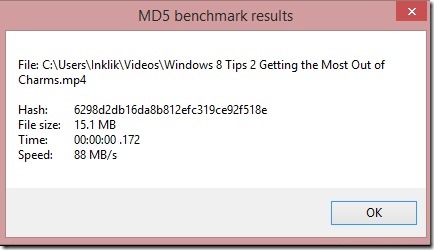 Here are some more hash calculators for Windows that you might want to explore.

SendTo MD5 is a straight simple but handy MD5 hash generator and checker. Its major advantage is that you can add MD5 option to context menu, so that if you generate lot of MD5, you can just right click on the files to do that.