RAM is the fastest memory in a computer. It stores the computer code and data that is currently being used. A RAM has almost the same read and write speed which is roughly ten times faster than an SSD. In this article, I will cover an open source software that lets you create a RAM disk on your computer.

ERAM is an open source software that lets you use RAM as a storage drive. It creates a disk on your RAM that you can use to store temp files, browser cache, etc. As that disk is using RAM, so, all the information stored in it is accessible at a faster speed. This means faster loading time when accessing files which will speed up the respective program. You can use this RAM disk to test software by storing them on the RAM disk.

How to Create RAM Disk to Speed Up Programs?

To create a RAM disk to speed up programs on your Windows computer, first, visit the ERAM GitHub page and download the appropriate version of the program as per your system architecture. Once downloaded, run the ERAM.exe file. By default, this will extract the necessary files to C:\ERAM folder on your computer. You can also change the location while extracting.

After that, go the C:\ERAM folder and click the install.bat file to create the RAM disk. This will make the required changes to your computer including Windows registry and create a RAM disk. The size of the RAM disk is decided automatically based on the current RAM memory of your computer. 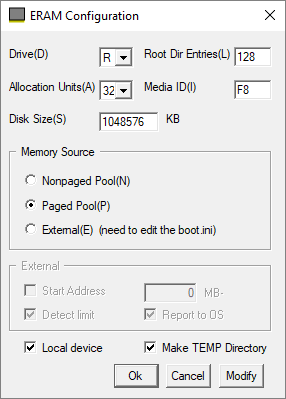 From the ERAM Configuration window, you can also change the Memory Source to any of the following options:

If you go with the External option, the RAM disk will act as a removal drive. That means, there will be no temporary files. After making the appropriate changes, click the Modify button to write the new configuration to the software and then, press Ok button to apply the changes upon system reboot.

ERAM is a handy tool that lets you use RAM as a storage drive on a Windows computer. By having a RAM disk, you can speed up the loading and running of programs that use stored files. As, RAM is a volatile memory, this program creates an image of the RAM disk on shutdown and loads that back to the disk upon reboot.