Command Pad is a free open source software for Windows and Mac to run command line tools. This freeware provides a graphical user interface to run CMD/terminal commands. You can add your frequently used commands to this tool, specify parameters, like, inform you when execution complete, and then use it as your toolkit for frequently run commands. The output is shown in a nice window.

This software is based on Electron, so it runs equally well on Windows as well as Mac.

Do note that the output is non-interactive and doesn’t allow you to input values if prompted by a command during its execution. You can monitor the output of a command and play/stop it anytime. From it, you can run from simple commands to commands that require administrative privileges. So add your most frequently used commands or command line tools in Command Pad and then run them in a flash without having to type same commands again and again. 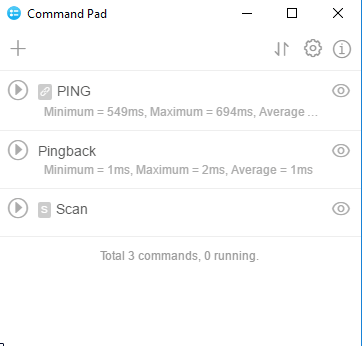 How to use this free software to run command line tools:

Getting started with Command Pad to run command line tools is really easy; just download it from the link provided at the end of this article and add multiple commands to run anytime from its GUI. After adding a command, you can run it and monitor its output, but as I mentioned earlier it executes the commands in a non-interactive mode i.e. you can’t specify input parameters if prompted by a command. So, it is best suited for executing command line tools that do not require user interaction for completion of its execution. 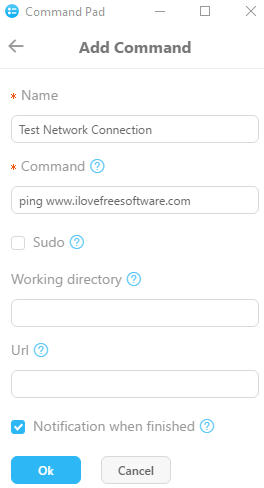 To add commands, click on “+” button that appears on its main interface. It will then pop-up a dialog box in which you have to specify a command name, command, its working directory, and several other parameters like whether it requires admin rights or not, and URL.

Let’s see it by adding a simple PING command in Command Pad:

Step 1: Click on “+” button on the top-left part of Command Pad’s interface.

Step 2: Now, you have to specify following parameters to add a PING command:

After specifying these parameters, click on Ok button and the command will be added to its main interface. Now you can simply run this Ping command by just clicking on its Start icon. 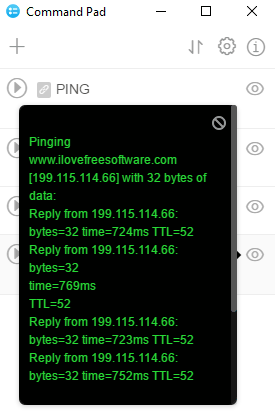 Once you have clicked on Start button, it will then start executing the command and you can monitor its output by hovering your mouse over the eye icon. The best part of Command Pad is that you can use it to run multiple commands at the same time. You can also use it for advanced purposes like running test scripts, and development servers, etc.

Command Pad is a free software to run command line tools. It offers a graphical interface to run multiple commands and command line tools at the same time. You just have to specify a command and some of its parameters once and then you can run it anytime you want without having to type in same commands again and again. It is a good software if you are much into web development as you can use it to run multiple development servers at the same time without having to open them in different terminals/ Command prompt.