Looper is a free Software to play audio in a loop. This application is portable, lightweight and very easy to use. The interface has minimal functions with just a volume slider, a play button and a stop button. Users just need to load an audio clip and start playing the loop. Looper supports MP3, OGG, AIFF among 10+ audio formats.

Looper can be used to loop audio clips without any gaps. This makes it useful to test hi-hat, snare and drum samples which can further be used in digital audio workstations if you like them. You might also like Alchemy Player, which is a free audio synthesizer for Windows and Mac.

How to Loop a Sound Sample using Looper

The audio will loop according to the sample’s length. Sadly there is no speed knob or a BPM (beats per minute) controller which helps in controlling how many loops are played in a given time. You’ll have to get samples which have a silent space at the end. Longer the silence, lesser will be the BPM of the produced loop.

How to Record the Audio Loop Played By Looper With Audacity

Since Looper doesn’t have an inbuilt export/save function to save a continuous loop, you’ll have to use a third party software that can record the audio playing on your system. I am using the free audio workstation called Audacity to do that. 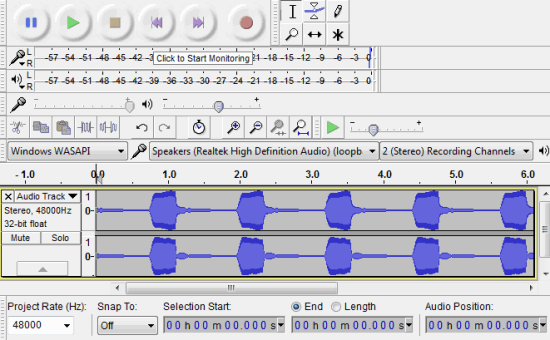 To record the Looper audio loop, I ran an instance of Audacity and selected Windows WASAPI in the Audio Host dropdown menu. I played the audio loop on Looper and armed the record button. The loop started recording. You can export this recorded loop from Audacity in WAV or MP3.  I am sure music producers and DJ will add more beats and synths for the fun of it.

Looper does what it is intended to do but it is deficient in functionality when it comes to saving the loop and controlling the speed of the loop. You can use it repeatedly play and analyze audio samples such as EVP (electronic voice phenomenon), court confessions, etc. I award it 4 stars.