The most convenient place to quickly save files on a PC is the desktop. But, if you don’t organize the desktop in a systematic manner, it quickly gets messy with all the files and folders you saved there. No matter how hard one tries to keep the desktop organized, we all have the days with a messy desktop. macOS Mojave addressed this problem by introducing the Desktop Stacks feature. This feature automatically organizes the desktop items in containers stacked up with similar items. Windows don’t offer such a feature yet but you can get something similar on Windows too.

This article covers a simple method to get macOS Mojave-style Desktop Stacks on Windows. This method involves a free software Nimi Places that organizes the desktop into customizable containers and displays folders and files thumbnails. This software is not as robust as the macOS’s Desktop Stacks feature but it does the same thing with a few intermediate steps and helps you organize the desktop and keep everything neat and clean.

Also read: How to use Dynamic Desktop feature of macOS Mojave in Windows 10

Nimi Places is a free desktop organizer software for Windows that provides you with containers to hold the files and folders in a more systematic manner. You can download this portable software using the link provided at the end of this article. When you run this software for the first time, it shows you previews of 6 different templates which you can use for the desktop layout. If you want to create your own layout from scratch, you can do that by choosing the manual option. 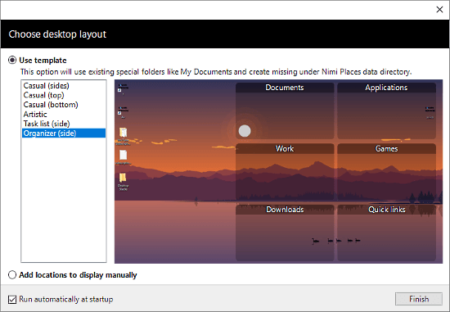 Depending on your selection, it makes the respective changes to the desktop. If you choose a template, it loads all the containers of that template on the desktop. And, if you choose the manual method, it lets you add containers from the system tray icon. 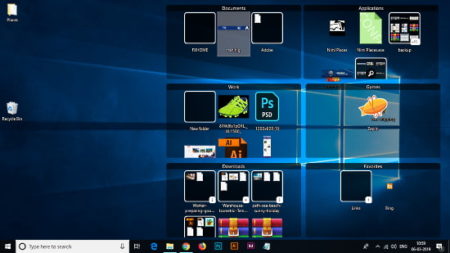 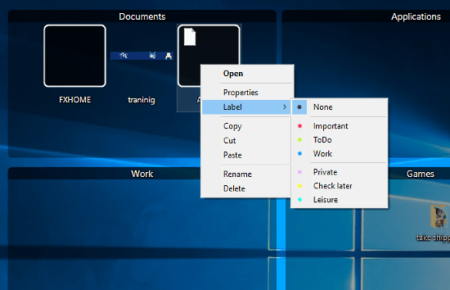 All the containers are customizable. You can rename them to whatever and add any number of files and folders to them. You can also label each individual items from a container for further organization. This way, you can organize your Windows desktop in Desktop Stacks-Style.

Nimi Places is a handy little software that helps you keep your desktop well sorted and clean. It mimics the visual appearance and features of Desktop Stacks with a few extra steps. In case you want all the goodies of macOS’s Desktop Stacks on Windows (including auto-organize), I recommend you to try Fences which is a paid desktop organizer software.