PhoenixOS is a free Android based desktop operating system. It gives you the ability to run most of the Android applications in a Windows-inspired desktop environment. Using this Android-based operating system will give you a feeling of using an Android device itself.

Its UI is very similar to Android 5.1 (Lollipop). You can start enjoying your favorite Android apps right away using PhoenixOS. It comes with flexibility to resize, maximize, or minimize several Android applications at once. 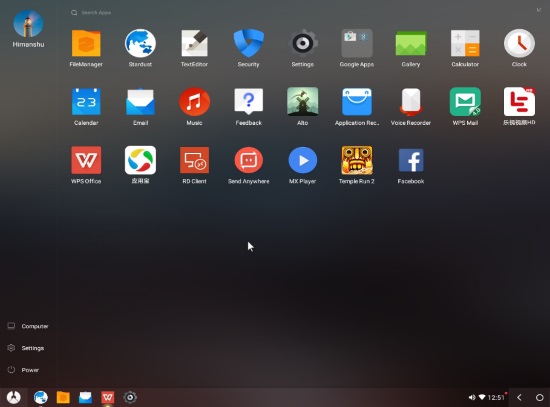 PhoenixOS supports Google Play Store, so you can download apps directly from it or you can also download and install apk files from other websites to download apk. You can download a plenty of Android applications from these different sources and have fun with your Android PC. It also comes with some pre-installed applications like MX player, WPS Office, RD Client, etc.

You can also create a live session of PhoenixOS by installing it on a Flash drive and then boot from it. You can also choose to install this free Android based desktop operating system on your hard drive.

One exciting feature it provides for Windows users is that if you use PhoenixOS from a Live Flash Drive, then you can also access your Windows files through it. In fact, its File Manager displays all of your Windows partitions, so you can quite easily access your files in a Live session too. This feature is quite exciting because you can play your favorite music, movies, or edit your important documents while working with other Android applications.

Now let’s dig deep into PhoenixOS and its features.

UI capabilities of this Android based desktop operating system

As I mentioned earlier, its desktop environment is inspired by Windows 10. It comes with a Start menu, a Taskbar, Notification center, Context menus, and supports various operations on application windows like minimize, maximize, resize, close, and drag and drop files to move from one location to another.

Just like Windows 10, click on the bottom left Start menu icon to see the list of applications. You can also search for applications if the list is large. However, it does not support dragging and dropping applications to its desktop screen or taskbar. To perform this action, right-click on an application and select pin to taskbar or pin to the desktop. It also doesn’t let you move apps in the taskbar, just like in Windows. 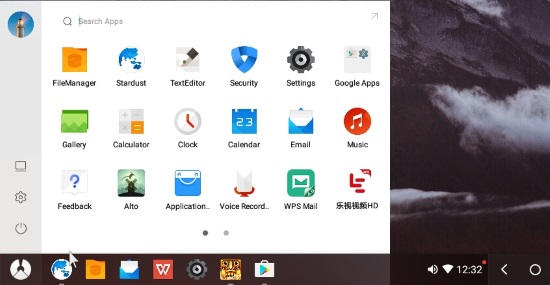 Some of Android games and apps opens in full-screen mode by default. So it depends on different applications whether they support windows resizing or not. Some of its pre-installed apps like MX player, File Manager, and Facebook (Downloaded) suppor windows resizing. I also tried resizing the window of its Stardust browser, it performed the task well in resizing web UI elements. And I can’t stop myself from letting you know that my browsing experience with it was seamless and flawless. 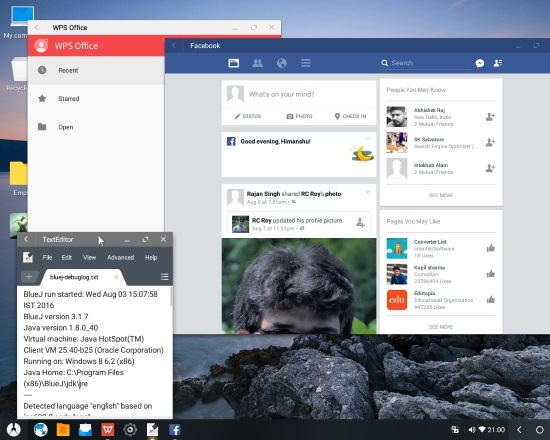 It also comes with Notification center, that displays all notifications from different apps and OS itself. This Notification center is quite similar to notifications panel of an Android device. It also lets you turn on/off Wi-fi, Bluetooth, GPS/location service, change Windows orientation, brightness level, turn the volume up/down, and quick access to Settings (just like Control Panel of Windows).

Any other options that you would like to perform like uninstalling apps, enable/disable auto-start apps, applying pattern lock screen, etc can be just as the way it would be done on an Android device.

This Android based desktop operating system comes with the list of pre-installed Android apps. The lists include apps from various categories like WPS for documents editing, a powerful browser i.e. Stardust browser, Google Play Store, and many more.

In terms of language support, this OS supports English and Simplified Chinese.

I really liked this Android OS but I was quite disappointed with its gaming experience. It lagged quite a few times before I could play my favorite Temple Run 2, but I didn’t come across any lagging problems in playing one of its pre-installed application Alto, a snow surfing game, but it was a lightweight game as compared to Temple Run 2. Still, it was a real fun running different applications and playing my media files from Windows OS.