In this article, I will cover a simple method by which you can play the Chrome’s Dino game without going offline.

Google Chrome is one of the most popular internet browsers. Along with great features like account sync, security, etc., it also has some nice hidden features and tricks. One of the features is the Dino game. Whenever it’s unable to connect to the internet, it loads a mini-game with a running T-Rex and hurdles on the way.

Generally, in case of most of the Internet Browsers, when you access something on the web and suddenly your connection goes down, you get a boring screen with “No Internet Connection” message. The Chrome UX engineer Edward Jung, who initially came up with the idea, says that to make that boring screen fun was the motivation behind the idea. You can read more about the origin story of this Dino game here.

How To Play Chrome’s Dino Game Without Going Offline?

To play this Dino game without going offline, you can load it by typing its name. Simply type the following text in the address bar and press Enter: 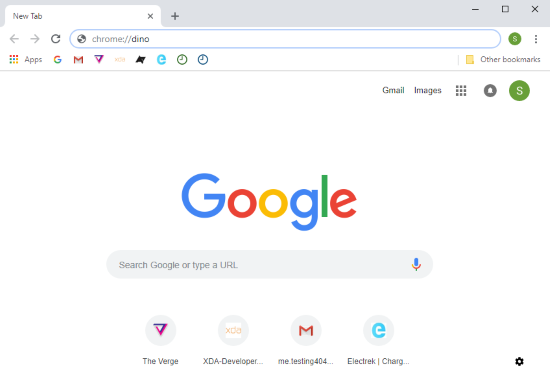 As you press Enter, the Dino game will load in your Google Chrome with the T-Rex ready to run. And, this is how you can play this game with going offline.

This is an endless runner game means you can not reach to its end, at least not in your lifetime. The approximate maximum time required to finish this game is 17 million years, which is the same amount of time T-Rex was alive on Earth.

Putting a game in a web browser is a really creative idea. Instead of a boring “No Internet” screen, it entertains the users during downtime. And, by this simple method, now, you can play Dino even when you are online.