PicPick is a simple to use free image editing software that separates itself from others such as Paint.Net and GIMP in that it decides not to overload itself with features in order to have the simplest interface they can possibly have. This makes this free software accessible to various users, from complete novices to seasoned graphic designers who cannot afford to shell out on something expensive like Adobe Photoshop. 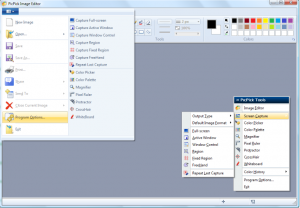 GIMP and Paint.NET are solely image editors. PicPick is a free image editing suite that has a series of extra features with it. Particularly useful is the screen capture system which allows you to take a screenshot of either the whole screen or a specified area and then either save it to their computer or even share it using FTP or a social network such as Twitter.

Also uniquely, this free image editing suite contains a magnifying tool that can be used to increase the size of a small window of screen space making small print or otherwise small areas easy to read. This can be particularly useful in situations such as when cutting out an image as it enables you to monitor the edge that you are removing pixels from carefully and at a higher magnification. This also means you do not need to install a screen magnifier like Smart Zoom separately.

So to conclude, PicPick is an interesting free image editing suite that sacrifices some of the more powerful editing tools in order to have some very useful extra bits that are unavailable in the competition programs.

However, there are a series of small downloads out there that mimic the extra features present in PicPick and so it may well be a better choice to download a more powerful free image editing suite and just download a few extra programs.

If your goal is convenience and simplicity though, then PicPick is a solid choice.