Greenshot is a very simple, yet effective and high quality free screenshot tool. It can be used to produce crystal clear snaps of what appears on your computer screen, whether that is the whole display or simply a small segment of what was happening at that time. 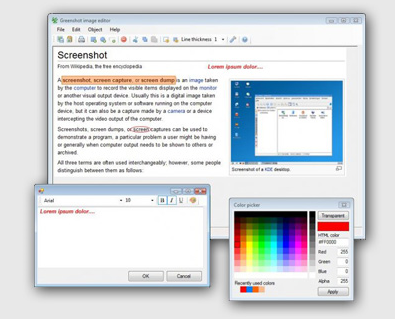 In this free screenshot tool, the actual process of snapping your desktop is very simple indeed. There are three modes for the screenshots (full screen, window and region) and they are self explanatory in meaning. Each of them can be accessed from the right click menu or a simple keyboard shortcut, meaning that this process could not be much easier.

In fact, I don’t think I have come across any software that makes this process as efficient and simple as Greenshot does. It scores points over its competitors here.

That’s All Of It, Right?

This is where Greenshot becomes special and different than other free screenshot tools. Once you have taken your screenshot in one of the three modes, you are automatically presented with a very simple image editor.

Impressively, this allows you to carry out a series of basic edits to your screenshot and then save it. This means you don’t need to use a separate image editor like Paint.net, or GIMP to edit your screenshots.

Often, a screenshot will acquire a little bit of retouching (or perhaps a word or two explaining what it is) before it is fit to be shown to someone and this editing interface can do that job perfectly.

You would be forgiven at first glance for thinking that this free screenshot tool was exactly the same as many others, or even the simple Windows Snipping Tool. However, when you actually use it, it starts to become obvious that the extra layer of functionality provided by an image editor means that it has more to it than its competition.

This extremely useful extra add-on means that Greenshot probably ranks as just about the best free screenshot tool I have ever come across.