With a blog post and a tweet, Gmail has announced an upcoming update to Gmail that will allow users to send multiple emails as attachments. This new feature is gradually rolling out in Gmail and you can expect it in your Gmail inbox in the upcoming weeks. When it’s available, you get a “Forward as attachment” option in the three-dot More menu.

Also read: How to get Outlook-style Email Preview in Gmail?

How to Send Multiple Emails as Attachments in Gmail?

This new “Forward as attachment” feature is simple to use and way easier than any other conventional or third-party method. To send multiple emails as attachment first select the emails that you want to forward. Then, click the three-dot More menu from the toolbar and select “Forward as attachment”. This opens a new compose box with all the selected emails attached. You can simply add the recipient(s) and send the mail. 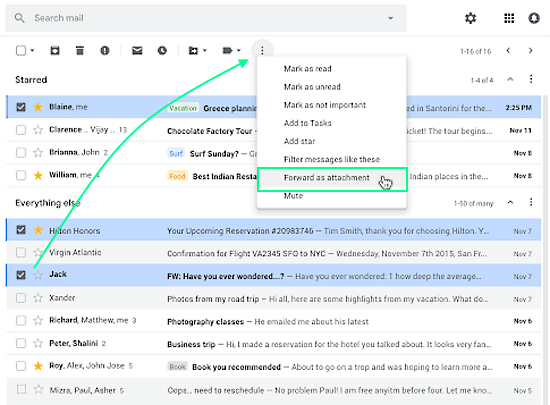 Alternatively, you can open a compose box first and then select and drag multiple emails to it. Doing this adds all the selected emails to the current email. The emails are added as ‘.eml’ files that you can then send single or multiple recipients.

The recipients get all the emails attached as .eml within a single email. Clicking a mail opens that email in a new window where they can browse the emails in a thread-view without having to jump back and forth like in the conventional sharing method.

Gmail has listened to its users and finally added a feature to send multiple emails as an attachment in Gmail. Sending emails as attachments allows you to write a summary email message to your recipients. This also keeps the recipients’ inbox organized and clean as all forwarded emails ad bundled within a single email. This is a much-requested feature that will make forwarding multiple emails a breeze.