Almost all the feed readers out there support multiple RSS feeds. So, there aren’t lot of reasons why you would want to combine multiple RSS feeds into one. But in case you do, these services would easily let you do that.

One of the reasons I had combined a few RSS feeds into one was to filter RSS feeds via Yahoo Pipes; so, instead of repeating filters for all of them, I just combined them into one RSS feed and then applied filters on combined RSS feed. Another occasion I had combined RSS feeds was when I wanted to display feeds for all my websites in sidebar of my WordPress blog. The widget that I was using at that time supported only one RSS feed, so I used one of these services to combine feeds into one and passed to that widget.

If you also have one such reason to combine RSS feeds, then these services would come handy to you. 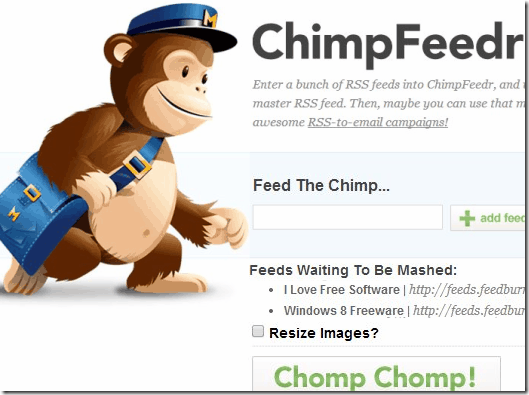 ChimpFeedr (from MailChimp) is one of the best free online service to combine multiple RSS feeds into one. Just go to the homepage of this website, provide URLs of all the feeds that you want to combine together, and it will give you a combined URL of all the feeds. There is no limit on number of feeds that you can combine. The best feature that I like of this service is that it does not even requires any registration. Just go to the homepage and start adding the feeds that you want to combine. Another interesting feature that it provides is that it lets you resize images, so that you can see their scaled down versions in RSS feed. The downside of this website (actually, almost all the websites in this list, except Yahoo Pipes) is that once you have added some feeds to make a combined RSS feed, there is no option to edit it later, so as to add or remove some feeds from that.

You can read its full review here. 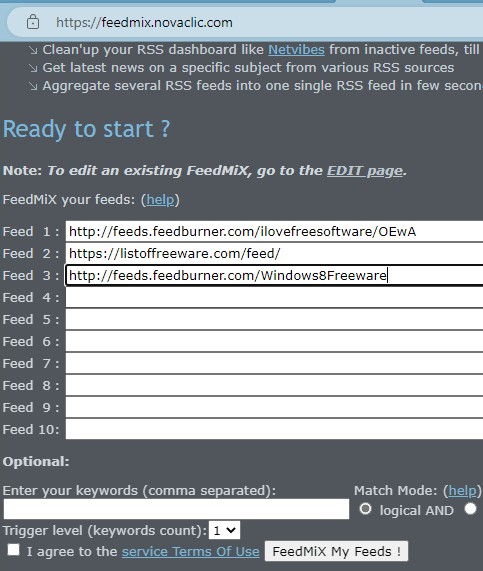 FeedMix is another easy-to-use online service to combine RSS feeds. It lets you combine up to 20 RSS feeds into one. It gives you URL of the combined XML feed, that you can pass to any RSS reader or RSS Parser tool. A great advantage of this tool is that here it doesn’t ask you to create a free account or something. Also, the finally generated combined RSS fed editable. You can anytime go back and add or remove source URL from your mixed RSS feed.

Apart from just creating RSS feed mashups, you can specify some filters as well. You can enter list of keywords and matching condition. Based on what you specify, it will filter the incoming feed for you.

Getting started with this RSS mixer services is very simple. Access this from the URL above and after that on the main homepage, you just keep adding RSS feed URLs of different websites. Once you are done, there is a filter option. In case you want to filter something, you will do it from here. Finally, submit the feeds and on the next page, it will give you the feed URL of the all the combined feeds. Later, you can come back and use the combined feed URLs to edit the source feeds.

Feed Informer is yet another free feed combiner tool which you can use to merge multiple RSS feeds into one. It takes URL of the RSS feeds from you and then generate a final RSS feed URL that you can configure in the RSS reader apps and software. Basically, here it lets you create different kind of digests. 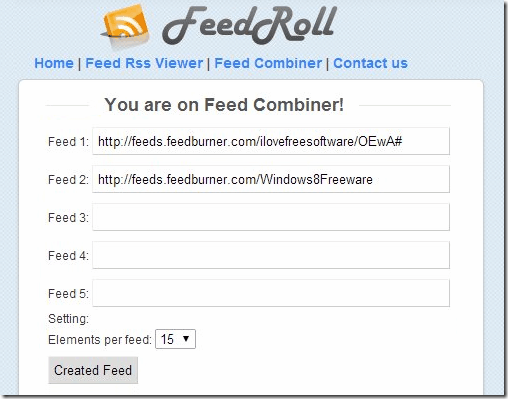 FeedRoll is another online RSS aggregator to combine RSS feeds. This one also puts a restriction that you can combine up to 5 RSS feeds only. Additionally, it lets you limit number of elements per feed (up to 15). But instead of being able to limit number of items separately for each feed that you enter (like it is possible with FeedMix mentioned above), you can make just one global setting for all the RSS feeds.

As I said in the beginning, there aren’t many reasons why you might want to combine RSS feeds, but in case you need to, the list above should serve your purpose. If you need a quick solution without lot of customizations, then first four in this list would work for you. But in case you need a more powerful solution with lot of customization options, then Yahoo Pipes would be your best friend.

Do you need to combine RSS feeds? Why? Which service do you use for that? Let me know in comments below.