Grasshopper is a learning app that offers coding lessons for beginners. This app is developed by Google’s experimental workshop called Area 120 and initially launched back in 2018 for Android and iOS devices. Now, they bring this app to the web means you can access it on desktop and learn to program on your PC.

Unlike many other coding apps, Grasshopper takes a different approach to teach beginners how to code. Instead of picking a programming language and starting with it’s basic, it starts with coding fundamentals and concepts. It has game-like coding projects where you have to step-by-step complete each lesson to unlock the next. Each lesson teaches you a concept or coding syntax with hints and guides to help you out. It also has a code editor where you have to write the code based on the problem. The web version of the app introduced new classes specifically designed for your laptop or desktop.

Also read: Coding Games for Kids to Learn Programming with These Free Websites

Learn to Code Free with Google Grasshopper on Desktop

Grasshopper web version works almost the same as the mobile app. When you log in with your Google account, it shows you a list of available projects. The mobile apps features around a dozen projects whereas the web version currently have the following four projects:

Three of these projects are locked so you have to start with Fundamentals and complete that project to unlock the next project and so on. 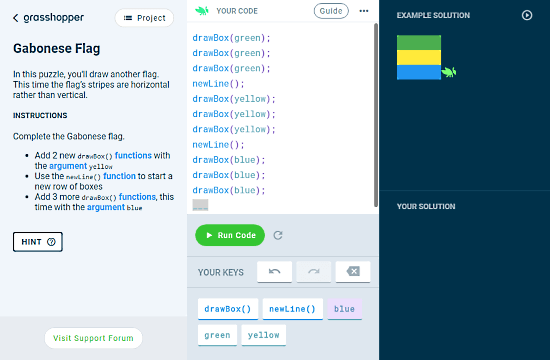 Each project has multiple levels which teach you coding using puzzles and example. First, it gives you a problem with an example and asks you a question or to write code based on that. Since this app is targeting the beginners, you don’t really have to write the code initially, all you have to do is pick the options to complete the code. And, you can easily do that by learning from the problem and the example. In case you need help, you can check hint or use guides to help you with the code. 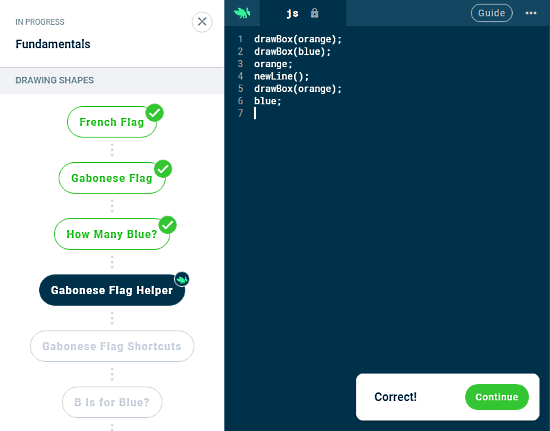 Once you successfully solve a problem, it shows you a progress map of the project and takes you to the next lesson. From the progress map, you can jump back to any previous lesson. This way, you have to complete all the lesson to finish a project. With this gamified method and creative problems, beginners can easily learn to code.

Give it a try here.

Grasshopper is a nice code learning app that involves you in learning instead of focusing on theoretical concepts. It has a few projects at the movement but I expect that more projects will be added to it over time. Bringing this app to the desktop (via web app) makes it a lot easier to keep notes and practice. As compared to a mobile device, you can easily multi-task on PC, keep notes, and lookup for references.