Depending on the region and OEM, an Android phone might come with a handful of apps pre-installed on it. Some of these apps are OEM’s replacement for the stock AOSP apps (e.g. Gallery, Camera, Clock, etc.) but the rest of apps are not so useful and can be considered as bloat for one who never uses them. And, if you go with a carrier, you get a few more apps on top. All such apps not only add bloat to your phone but also takes storage memory and RAM.

Most users just stack those apps in a folder to keep them away from their apps. Some users disable such apps to keep them out of the app launcher. But, if you don’t want such apps on your phone, you can remove them completely. This article covers a simple method to uninstall carrier/OEM bloatware from Android without root.

Also read: How To Block Built-In Android Apps Without Root

The method I’m going to explain in this article uses the ADB (Android Debug Bridge) to uninstall apps, even from the ‘System’ partition. So, before moving further, you need ADB installed and set up on your PC and Android phone. You can follow this detailed tutorial to install ADB on Windows, macOS, and Linux and connect the phone with ADB mode.

Once the ADB is set up, run the following command:

This command returns with the serial number of device and hence verify that the device is connected to the PC via ADB.

After that, run the following command to get a list of all the apps installed on your phone by OEM/Carrier: 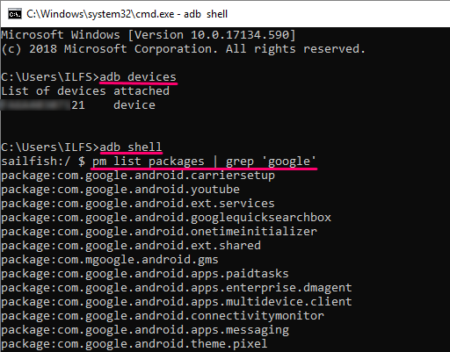 For example, I used the Google Pixel phone for this tutorial so I replaced the <OEM/Carrier/App Name> with ‘google’. You use your phone’s OEM/Carrier name there.

Executing this command gives a list of package names of apps by the respective OEM/Carrier.

Alternatively, you can get the app package name using the APP Inspector app on your phone. This app lists all the apps (system & user) installed on your device. Find the OEM/Carrier apps from the list and write down their package names.

Once you have the package names of the OEM/Carrier apps, you can uninstall them using the following command:

For example, I want to uninstall the Google Play Music app, so I used it’s package name in the command to uninstall it from my phone.

This way, you can uninstall any OEM/Carrier bloatware apps from your Android phone and keep you app launcher junk-free and clean.

With this simple method, you can easily remove the unwanted apps from your Android phone. The command used in this method uninstall the app from the current user profile which means it doesn’t make any prior change to the system and you’ll still get all the OTA updates.