It also supports basic image editing options like crop, resize, rotation, etc. You can also apply a number of different effects offered by this app to your photos. At last, you can save the edited photo in any of the 3 file formats i.e. JPEG, PNG, and WEBP. It also gives you the option to compress the edited photo before saving it to your device. 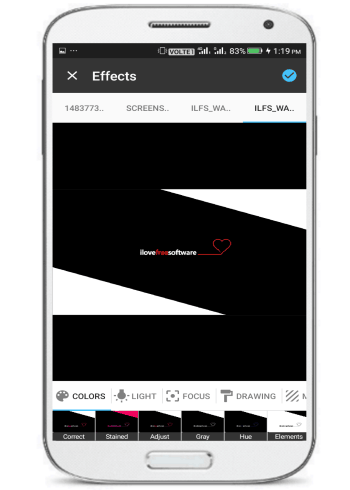 There are many desktop image editors with multi tab support, like Paint.Net, GIMP, etc but this functionality is found missing in most of the Android apps. If you want to edit multiple photos at once on Android, then this app is worth a look. You can simply open any number of images and edit them through its tabbed interface. However, you can’t copy/paste a part of a photo to another photo in a different tab. If this feature was available, then certainly its usability would have increased manifolds. You can edit photos individually through this photo editor app with multiple tabs.

How to use this photo editor app to edit multiple photos at once on Android:

Let’s see the steps to edit multiple photos at once on Android using this multi-tab photo editor app:

Step 1: Once you have downloaded this app, open it up to edit multiple photos at once. It will first prompt you to select a photo to edit. After selecting a photo from your gallery, you can open another photo to edit. The second photo will then open in a new tab, as you can see in the main screenshot of the Android app. To open a photo in the new editing tab of this Android photo editor, select the option Open photo from its menu. Similarly, you can open as many photos as you want to edit multiple photos together in Android. You can tap on any of the tabs to quickly switch between them. 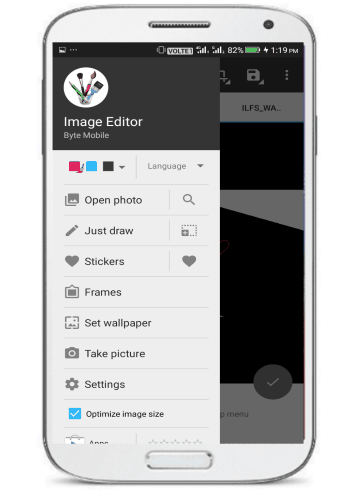 Step 2: Now you can edit a photo in a tab as you would in any other photo editing app. It gives you the basic transformation options like crop, resize, flip, and rotate the photo. Tap on the crop button and select any of the options to transform the photo. It also lets you apply a number of different effects to photos. Just tap on the effects button and then select an effect to apply. 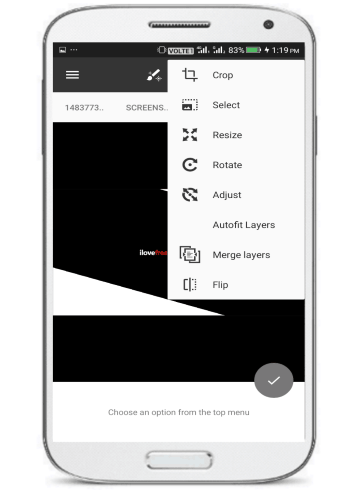 Step 3: As I mentioned, you can also add layers to photos for editing in this app. To add a layer, tap on the “+” button and select “New empty later”. It will then add an empty layer to the current tab photo. You can now draw, add text, and other editing option on this empty layer. It also lets you move a layer up/down and turn on/off its visibility. To access these properties of a layer, tap on a layer and the select Layer Properties option by tapping on the menu button at the top. 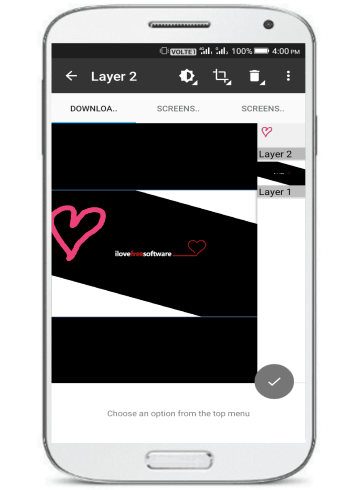 Step 4: At last you can save a photo, by tapping on the save button on top of its interface. It will then prompt you to select a file format in which you want to save the photo and the compression ratio. You can set the compression ratio by moving the slider from 0 to 100, where 100 means no reduction in quality. 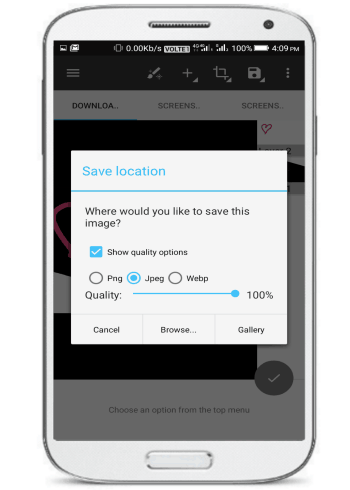 Image Editor is a free Android photo editor with multiple tabs and lets you edit multiple photos at once. The best part of this multi-tab Android image editor is that it also comes with layer support for editing. You can work with multiple layers and edit them to edit a photo. Apart from that, you can also save the edited photos in any of the 3 file format i.e. JPG, WEBP, and PNG and set compression ratio. Do check it out as it lets you edit multiple photos at once on Android.