SHORTCUT SCANNER is a free Windows shortcut scanner to remove malicious shortcuts from PC. This freeware can perform a full system scan to find malicious shortcuts on your PC. You can then remove shortcuts in batch or delete them one by one. It also displays the Hex view and the complete path of the executable program associated with a shortcut. You can take a look at these 2 parameters to make sure that shortcuts flagged as dangerous by this software are really dangerous or not.

Apart from infected and malicious shortcuts, this freeware can also scan for broken shortcuts and delete them from your system. 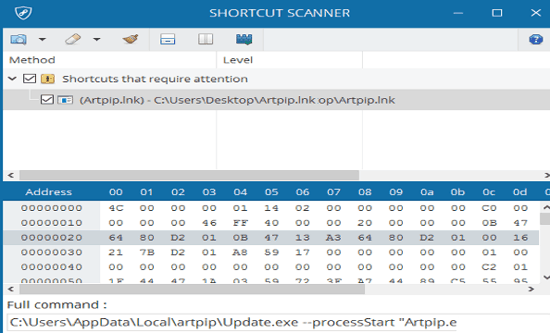 How to find and remove suspicious shortcuts from PC:

Well, you might not know that hackers can also exploit your PC via infected shortcuts and to make the situation worse some antivirus programs might not be able to detect those malicious shortcuts. This is where you can use this freeware to scan for infected and dangerous shortcuts on your PC and remove them. Simply, start by performing a full system scan to get a list of shortcuts with issues identified by this software. It categorizes the shortcuts into 3 different categories i.e. Broken, Suspicious, and, Dangerous.

Broken shortcuts are the shortcuts which don’t work as they point to a location which doesn’t exist. These are not harmful, but useless shortcuts which you should ideally remove from the PC.

Shortcuts in the Suspicious category requires a careful look as they might not be harmful. For analyzing purposes, this shortcut scanner displays the Hex view of a shortcut and the complete path of the executable program associated with it.

Finally, a shortcut is marked as dangerous if it satisfies any of the following listed criteria:

Fortunately, I didn’t find any bad shortcuts on my PC and it showed an issue with one of my shortcuts which I don’t think is malicious at all. You can batch clean shortcuts with found issues, but I will suggest you to take a look before cleaning up, as this might delete some useful shortcuts as well. 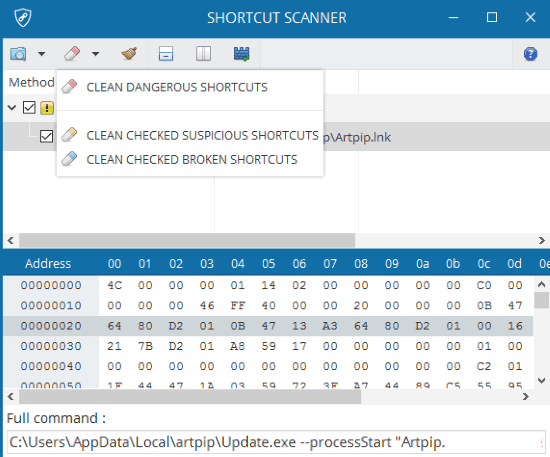 To delete junk and harmful shortcuts at once from your PC, click on the Clean button. It will then delete all useless and suspicious shortcuts from your Windows PC. You can also choose to delete infected shortcuts that belong to a particular category mentioned above i.e. Broken, Suspicious, and, Dangerous. To remove infected shortcuts of a particular category, click on the button right next to the Clean button and select any of the options like “CLEAN DANGEROUS SHORTCUTS”, which will delete all dangerous shortcuts from the scanned results.

SHORTCUT SCANNER is a free Windows shortcut scanner to remove malicious shortcuts from the system. I will definitely recommend you to check out this freeware as it can show the junk and infected shortcuts residing on your PC. However, take a look before deleting shortcuts as some shortcuts may be legit even if they are marked as dangerous. As it flags a shortcut as dangerous if it contains some arguments, so if you have created shortcuts for things like running some Chrome extension in Incognito mode only or hide address bar of Chrome, then this software might mark them also as dangerous. You can take a look at the complete program associated with a shortcut to decide whether it is harmful or not.