Crococryptmirror is a free application that encrypts files from a folder and keeps them on another folder. Both of these folders are in-sync with each other. So as the name suggests, they mirror each other with only the latter being encrypted.  Whenever you drop a file to be ciphered in the unencrypted folder, you’ll see its encrypted counterpart in the ‘encrypted’ folder. This application comes as a standalone application and also as a portable application. Since it’s portable, the settings along with the application can be moved into a portable drive.

Apart from all the above encryption specifications, the encrypted files are compressed for storage space optimization as well. You’ll also be able to use network drives to store encrypted/decrypted files. There are some effective ways to use this awesome application which I will mention later.

How to Encrypt Files with Crococryptmirror

After you install Crococryptmirror, you’ll be required to set a master password which will generate a keyfile. The password needs to be bigger than 8 characters. In addition to that, make sure you use different characters to make a really strong password. As a result, the keyfile will also be strong. Every time you open Crococryptmirror, you’ll be asked for this password. So choose wisely!

You’ll be presented with a simple interface where you can create a new encryption ‘container’ and review them. To start off, click on Create. You will need to name the encryption container as well as set source and destination folders. A good idea would be to set the destination folder as a Dropbox folder so users can keep an encrypted cloud backup of their important files. There is one more security feature that Crococryptmirror puts into action. Generated ciphered files happen to be headerless as well as renamed with a random short string.

Once files are dropped into the source folder, it will take 4-5 seconds for the files to be encrypted. If the file is big, it might take more. The folders will be automatically synced. You can turn off automatic sync by hitting Turn Off button under Sync Services. To sync manually, click on Start under Manual Sync. Users can make multiple encrypted backups from a common source as well. Just add more containers with the same source folder. 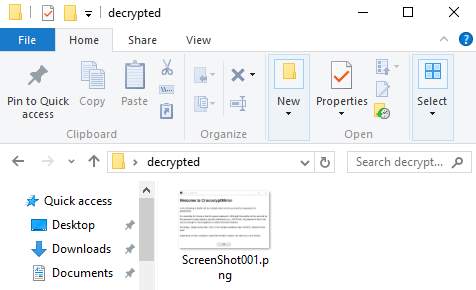 You can select a directory to be decrypted by clicking Decrypt. The Import function can be used to import containers with files you need to decrypt. To share your encrypted file with someone, send them the keyfile (can be browsed from Files tab) and the encrypted folder.

You can clearly see the level of security that Crococryptmirror offers to its users. Two features of Crococryptmirror that self promote, have to be its ability to headerless encrypt and the compression of the encrypted files. I did not come across a single bug or error while using this application. Therefore, I award Crococryptmirror with 5 stars.