With the evolution of the internet, music has moved from physical disks to the cloud. Now, there are dozens of online music streaming services which allow you to carry your music with you. Apple Music is Apple’s take on music streaming service. It is quite good; it’ll definitely rank it at number 2 after Spotify (unless I’m in India).

The major problem with Apple Music was that you could only access it through the dedicated apps i.e., Apple Music app or iTunes. It didn’t offer any web client to access Apple Music on web browsers, until now. Apple has recently launched Apple Music web player in public beta. This makes Apple Music easily accessible on any device without installing the app. So, just like Spotify and other music streaming services, you can now easily your Apple Music collection on public computers, library, parties, etc.

Also read: How to Transfer Playlist from Spotify to Apple Music?

To access Apple Music on the web, simply visit the beta.music.apple.com and login with your Apple Music ID. The interface of the web player is similar to iTunes. You get all your collections and categories on the left side along with search bar. The media controls are situated at the top along with volume, playing queue and sign out option. 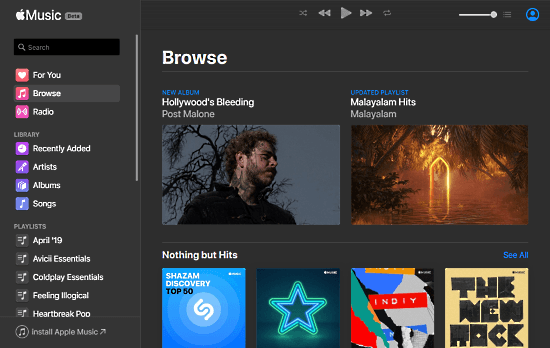 Apple Music is a little late to offer a web player but they did it quite right. Being Apple, they took care of the small things; one of those things is the interface. As Apple is implementing the dark theme to all their products, they added this functionality to Apple Music web player as well. The web player has an adaptive interface that automatically changes the theme as per the system theme and browser. 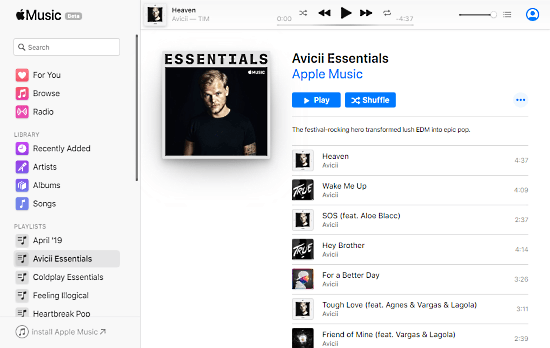 The theme works on Windows too. I tested the web player in Google Chrome running on the latest build of Windows 10. And, the interface of the web player automatically adapts to the Windows theme.

You can try it here.

Now we finally have a web player for Apple Music. People have been waiting for this to happen since the launch of Apple Music. With the new web player, you can access all your Apple Music collection instantly anywhere on any machine. This also covers up the little advantage other music streaming services had and bring the Apple Music in head-to-head competition with others.