The space scale visualization starts with an astronaut and compares it to the next known space objects arranged in an order of increasing size. You can cycle through the visualization back and forth using the arrow key. It shows the name of each object and shows you a scale of its size compared to the next bigger objects. Let’s check it out.

Also read: 5 Free Websites to Learn About the Universe

Interactive Visualization to Compare the Scale of the Universe

The Size of Space is a fun and educational visualization that you can run in any modern web browser i.e. Chrome, Firefox, Opera, etc. It also works with most mobile browsers so you can use it on mobile devices as well. When you open the website, it immediately runs the visualizations starting with an intro page. You can navigate the visualization either using the Left and Right arrow keys or by dragging the mouse cursor left and right. In the case of mobile devices, you can swipe left and right to navigate the illustration. 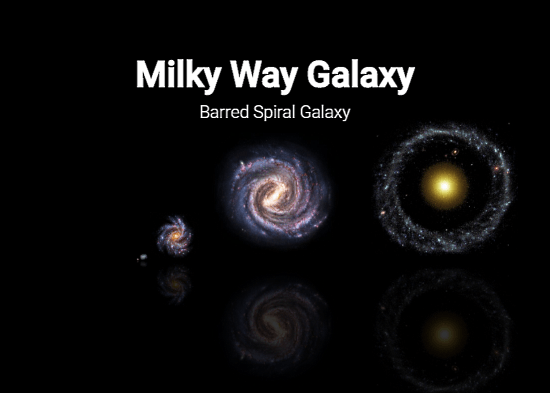 This interactive space scale illustration offers a graphical representation of various types of objects in the space. There are bigger objects in the space whose size is hard to imagine. So having a side by side comparison helps you imagine the actual scale of the space objects, planets, stars, nebulas, and the observable universe itself. It is good for educational purpose or you can explore it to calm your curiosity about the scale of the universe and the objects in it.