This article explains how to enforce a response length in Google Forms. Google Forms is a go-to form tool for most people and it totally deserves that with simple to use interface, integration with other popular services, and no ridiculous limitation or pricing. With all those major highlights, there are a few useful features in Google Forms that go unnoticed by most.

Enforcing a response length on questions is one such feature in Google Forms. This feature allows you to set a minimum or a maximum word limit for a given question. You can simply select the limit type and enter the character length to enforce the limit along with an error message for the case when the criteria is not met. So, let’s check how to use this feature. 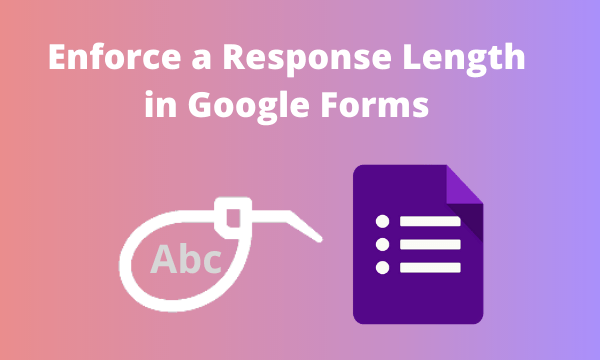 How to Enforce a Response Length in Google Forms?

Enforcing a response length is simple in Google Forms. This is a built-in feature that you can use while adding a question. Since Google Forms are easily editable, you can also add the response limit later while editing the questions. This feature is hidden under the 3-dot menu present at the right bottom section of each question. This is a dynamic menu where the options get changed based on the type of question you select. 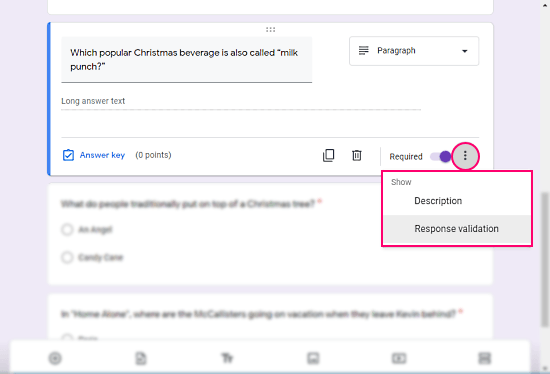 The response limit can only be enforced on the question where participants have to type their answers such as paragraphs and short answers. In case of those types of questions, you get a “Response Validation” option in the 3-dot menu. 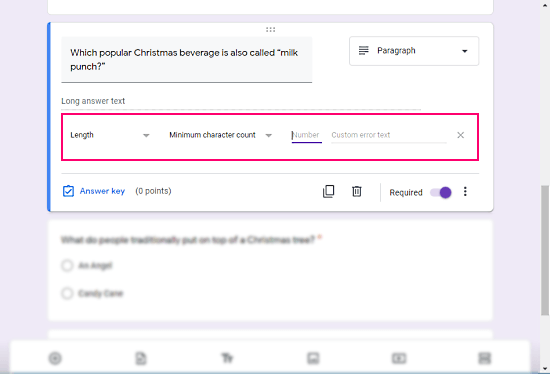 When you click on the “Response Validation” option, it adds a validation field in the question. The validation can be done either with length or regular expression. To reinforce a response limit, select “Length” in the validation dropdown. This brings another dropdown next to it. In this second dropdown, you can select whether you want to enforce a minimum character count or a maximum character count. After that, enter the desired charter count in the next box. For example, if you like to impose a 1000 character limit then enter 1000 in that box. You also get another box for a custom error message. Here you can type your own error message which will be shown to the participants in case the enforced response length is not fulfilled.

This is how you can enforce a minimum or maximum response length in Google Forms. This is a handy feature that can be useful for everyone for online tests, surveys, etc. By having the response length visible along with the question, a participant can construct their answer according and save the time of both parties.