LingoJam is a free online translator creator. Using this service, you can create a translator for a fictitious language that you want to create or have created.

This free online translator creator works on the fact that you devise a language based on the rules of pre-existing languages similar to English (like French, German, Spanish, etc.). The only limitation is that you cannot add grammatical rules. Using languages with different grammatical rules (East Asian and Middle Eastern languages) is quite difficult.

The translation is based on direct phrase translation as well as word translation. So if you enter a phrase like “Hello my name is Johnny”, you can substitute it for the same line as said in the translated language. The same procedure is with words, add direct counterparts of words. 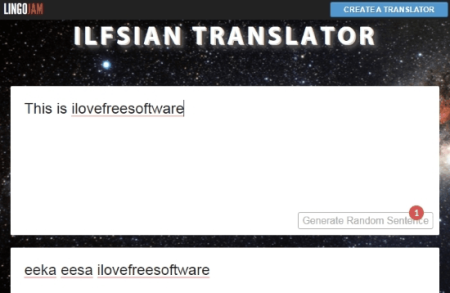 You can add prefix and postfix rules that can replace a certain letter or group of letters at the end or start of the word respectively. Just like Prefix and postfix, you can use infix to replace words in-between a word. A catch in using these three is that their priority is more than words you have added in the translation.

Two awesome features that this free online translator creator has provided are Regex rules and ordering rules. Using Regex (or Regular Expression), you can write a substitution rule instead of providing substitutions manually for each word or line entered in the translator. Using the ordering feature, you can tag words with different tags (such as noun, adjective, verb, etc.) and change the order they’ll be placed based in the tags.

Other features of LingoJam include:

How to Make your Own Translator: 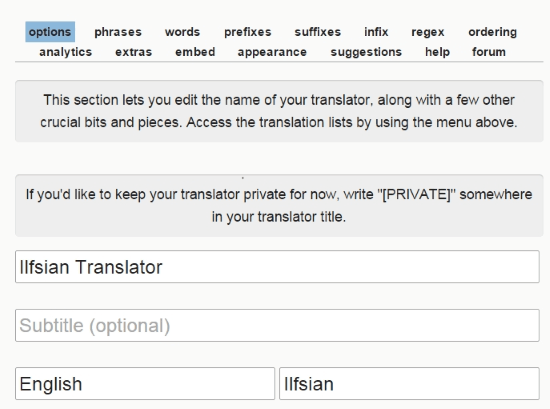 To save the changes, there is a save button on the top-right corner. Further, you can test the translator after you have saved changes by clicking ‘Translate!’.

Adding Phrases And Words in this free online translator creator: 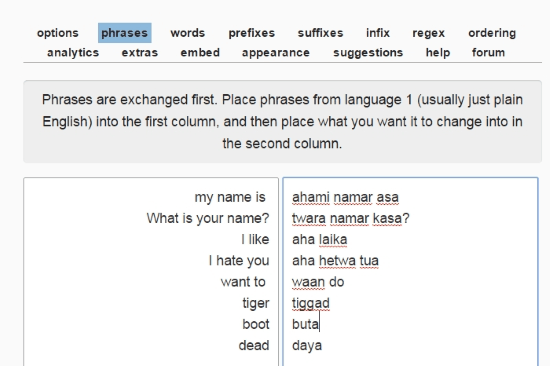 However, phrases have more priority over words. So if you enter a phrase with the words that have already been assigned, then the translation will happen based on the phrase.

In this  free online translator creator, a word can be translated based on its prefix, infix and postfix. It replaces the group of letters at the starting/middle/end of the word with the substitution provided. A fact to note here is that these three have greater priority over words but are overridden by phrases.

Regex is a type of language or a sequence of characters that defines a search pattern. On the Regex tab, you can enter a Regex Expression to substitute words with the defined pattern. In language1, enter the searching pattern and in language2, enter the expression you want to replace the searched part with. Some examples of Regex Expressions are given on the bottom of the page. The following screenshot gives you an idea of how Regex works. 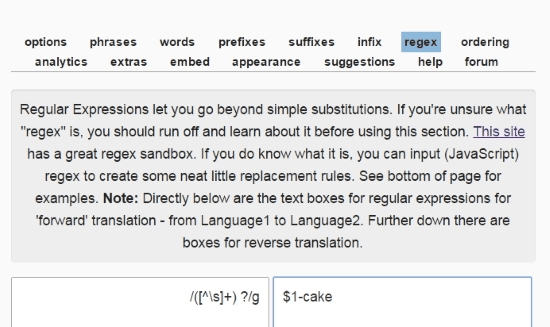 On the ordering tab, you can tag words with different tags (such as noun, adjective, verb, etc.) and change the order they’ll be placed based on the tags. You just have to enter the tags on language1 and rearrange them as you like on language2. While translating a phrase, the tags are added by enclosing it in two curly brackets.

Other Features of this free translator creator:

On the Extra tab, you can enter the default text(s) that will be shown when a user opens your translator for the first time. If you know how to code in JavaScript, then you can write your own code to translate the entered text. You have to make two functions: forward and backward. Using the algorithm you have provided, forward will be used for forward translation and backward will be used for reverse translation. 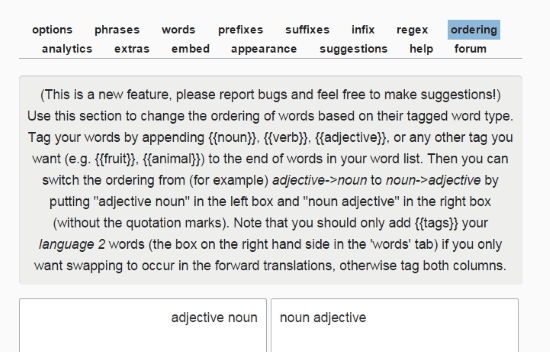 Embedding the Translator and Changing Visuals 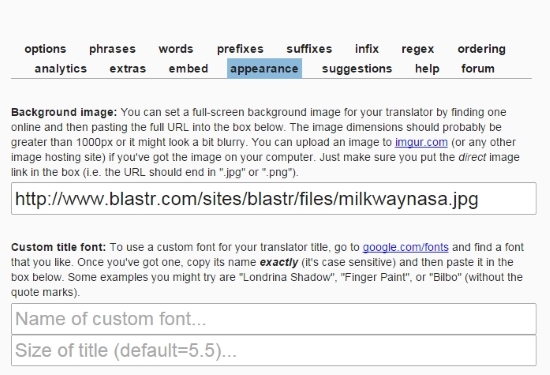 I definitely recommend everyone interested in linguistics to try this awesome service out.