In this article, I have compiled a list of 5 free Audio mixer apps for Android. These free audio mixing apps will allow you to mix multiple tracks, add beats and your recorded vocals to multiple tracks, apply cool audio effects, and at last save the project as MP3 or WAV files (not all) or directly share them to social media platforms like Facebook, Whatsapp, and even SoundCloud. I am quite sure that you will love all of the apps included on my list as they offer a very intuitive interface for mixing audios and tracks, and some of them even have their own music communities. You can share your audio mixes on these communities and one of the apps even allow you to add collaborators to your audio mixing projects. I have also included a very useful audio mixing App for DJs. So do check them out and mix multiple tracks together on Android.

Note: Most of the apps in this list are ad supported, and display advertisements. 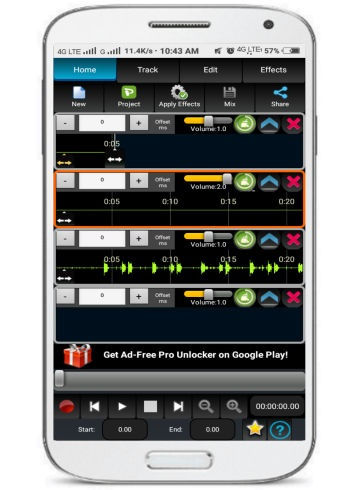 AudioDriod is a free audio mixer Android app. This is a pretty advanced audio mixing app as it allows you to record audio and add effects to it. The best part is that it supports multi-track recording and mixing. In simpler words, you can add multiple tracks, and this audio mixer app will mix them together. At last, you can save your audio mixing project/track as an MP3 or WAV file. The only limitation of this audio mixing app is that you can’t save mixed track with effects in its free version. However, you can apply effects to single tracks and save them in its free version. It supports MP4, AAC, MP3, OGG, and AMR audio files for mixing.

Getting started with this Android app to mix audio is quite straightforward; add multiple tracks and then audio to every track. To add multiple tracks, switch to the Track screen and then tap on the “Add Track” button. After that, you have to add audio to these tracks. You can either record your voice or import music from your phone in order to add an audio to a track. Select a track from its main interface and then tap on the Record button to start audio recording or tap on the “Open Library” button to add a track from your music library. After that, move to the Edit tab to edit tracks. You can cut or crop a part of the track. After you are done with the editing part, apply some effects but as you can’t save the mixed tracks with effects, it’s better to skip this step. If you are working on a single track then you can apply a number of effects from Bass, Hall reverb, Concert hall reverb, etc offered by it. Music creator pros will definitely like it as you can also configure 3 band equalizer, tempo, and pitch of the track as well.

At last, you can save the mixed audio tracks by tapping on the Mix button on top of its interface. You can save the mixed track as an MP3 or WAV file. A pretty good usage of this audio mixing app is to import some instrumentals and then record your own voice over it to mix them and create an awesome soundtrack. You must try it as this app makes it a really nice and easy. You can check out any of these music creator Android apps to create beats for your track. If you are interested in this app for mixing audios and creating soundtracks then download it from the link above and read its complete user manual to get started. 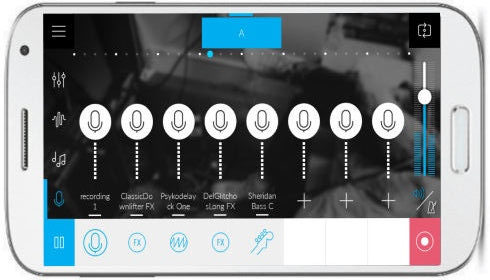 Music Maker Jam is a pretty awesome audio mixing app which offers tons of studio-quality loops from 200+ different music styles (you can only choose any 10 in the free version) to create a soundtrack. The best part is that you can record your own vocal and add the studio-quality beats to make it sound like a pro. Unlike AudioDroid, you can’t save the mixed track to your device but it does give you the option to share you track directly to SoundCloud, Whatsapp, Facebook, etc. Apart from that, it comes with a premium interface and it is quite easy to use as well.

Getting started with this free audio mixing app is really easy; download it from the link provided above and then create an account on it or simply login with your Facebook account. After that, this app will ask you to choose from different music styles like Hip Hop, Jazz, Pop, etc. It will then take you to its audio mixing interface. Tap on the “+” button to add a beat and Mic button to add your vocals. You can add multiple beats and record your vocals to mix them up. You can save the audio mixing project from its menu or share it on your Music Jam community, SoundCloud, etc. 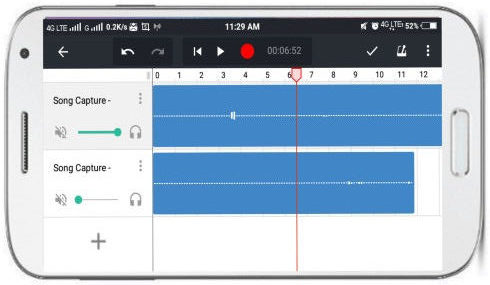 Bandlab is a very simple audio mixing app in my list. It allows you to mix up to 12 tracks together. You can add your recorded vocals or import a song from your music library and add them as audio to multiple tracks. It comes with a built-in tool called Metronome and Guitar Tuner. The best part is that you can also add collaborators to your audio mixing project. To add a collaborator, select the Projects from its menu and then open the project’s option. Now, select Invite collaborators option and after that, you can either search for another user of Bandlab to add as a collaborator or invite any other person by email.

Getting started with this Android app to mix audios is really a piece of cake; download it from the link provided above and create an account on it or simply login with your Facebook or Google account. After that, tap on the “+” button and select New Project option. Now, it will take you to its audio mixing interface. Tap on the IMPORT AUDIO button to select a track or recording from your music library. You can also record your own voice by tapping on the Record button. If you want to work with multiple tracks then tap on the Pro mode button which will allow you to add more tracks to mix together. To add another track, tap on the “+” button and select Add track option. After that, you can add audio to a track. To add an audio, select a track and then tap on the Record button. At last, tap on the “✓” button to save the audio mixing project either privately or publicly on Bandlab. 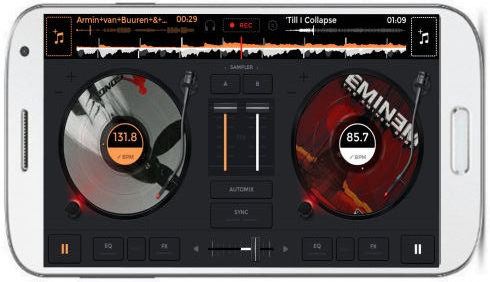 edjing mix is an audio mixer Android app for DJs. It comes with a very intuitive interface and all essential tools for DJs like real scratching, crossfade curve tool, auto mix mode, continuously sync tracks, and many others. The best part is that you can also integrate it with SoundCloud and Deezer (only in pro version) to access your tracks from this free DJ audio mix app itself. It is a very advanced DJ app and a popular one too and we have already covered its Windows 8 version. You can read its complete review here. In short, it comes with advanced music analysis, pro audio effects, smart playlist management, compatible with Mixfader, etc. You can read all of features and accomplishments of this app here.

Getting started with this DJ audio mixing app is really easy; download it from the link provided above and then import tracks from your media library. You can either import tracks from your device library or SoundCloud as well. After that, play both of these effects and tap on the record button on the top to record the mix. This recording is the actual mix of these 2 tracks and it will also reflect the changes that you apply to both of these tracks during mixing. Tap on the SYNC button and this DJ mixer app will then automatically sync these two tracks based on their BPM (Beats Per Minute). You can also configure 3 band equalizer of the track and apply pro audio effects. To apply the audio effects, tap on the FX button and then select an effect from Echo, Reverse, etc. At last, when you are done tap on the record button again to stop the recording. If you want to save the audio mix as an MP3 file then select share as MP3 file and then share it to Whatsapp (as it will then saved to Whatsapp Media folder) or another platform (may need to download as MP3).

Let’s see some of the key features of this DJ audio mixer Android app: 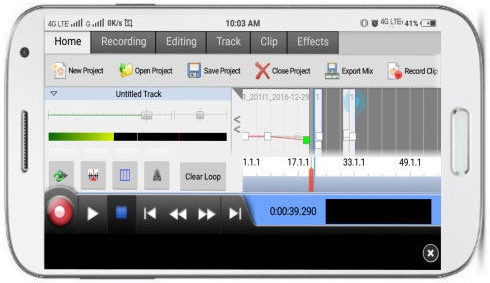 Mixpad Music Mixer Free is a free audio mixer Android app. Like other audio mixing apps in my list, it doesn’t support multi-track audio recording and mixing in its free version. The added advantage of this free Android app is that it supports Audacity files for editing. So it might come handy if you just want to edit some Audacity files on the go with this Android app. In its free version, you are limited to record and edit just a single track and apply only a single effect on it. So basically, it is a perfect fit as a recording studio for Android. Apart from that, you can only export the mixed audio track in WAV file format.

Getting started with this free audio mixing Android app is really easy, download it from the link provided above. After that, create a new project and record your vocals and apply an effect on it (only 1 supported in free version). You can also edit the recorded track from its editing interface and at last, you can save the project to your device or share it on Facebook, Whatsapp, etc.

In this article, I introduced you to 5 free audio mixing Android apps. All of these audio mixing apps are quite unique and offers distinctive features when it comes to mixing multiple audio files on Android. No doubt, edjing is the most advanced one but you can only use it to mix up to 2 tracks. Music Maker Jam offers high-quality studio-quality beats but you can’t add multiple tracks on it. So, it all depends on your preferences that will make an audio mixing app fit for you. I am going to keep edjing, AudioDroid, and Music Maker Jam on my phone. Best of luck with your audio mixing on Android with the apps included above :)