Reddit User Analyser is a free website to see top subreddits, total number of submissions, comments, best and worst comment of all timer, and other handy analytics for any Reddit user. I must say that it is a very pretty good website to get a complete insight of a Reddit user profile. It draws elegant graphs to show the comment and submission activity of a Reddit user i.e. number of comments and submissions over the period time. However, due to the Reddit API limitations, it can only analyze data from the last 1000 comments and submissions. It also displays a kindness meter and a text complexity rating which is calculated by Flesch Formula. 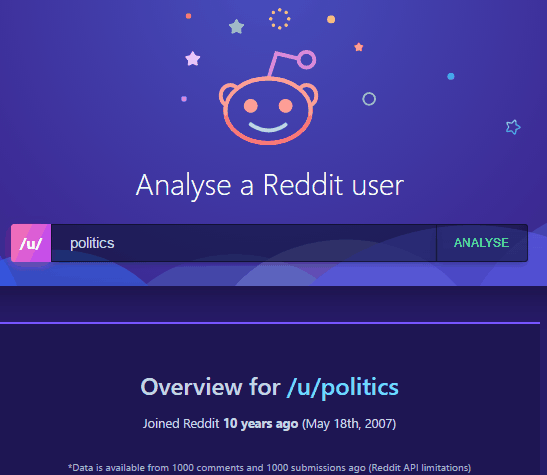 Reddit User Analyser is very easy to use, all you have to do is search a Reddit user by his/her username and it then displays data metrics of that Reddit user from his/her last 1000 comments and submissions. You can also get to know how old that user profile is or when a user joined Reddit. In addition to this, you can also see various graphs displaying the Reddit user karma, comment, and submission activity. You can see the comment activity graph of a random Reddit user searched by me. What I liked the most about this feature is that I was able to get to know the exact number of comments posted by that Reddit user during a specific time span. You just have to hover your mouse over a point on the curve of the graph and it will show you the exact number of comments during that time period. In the same way, you can analyze the submissions and karma graph. You can also analyze the controversiality rate of a Reddit user with a similar type of graph on its interface. 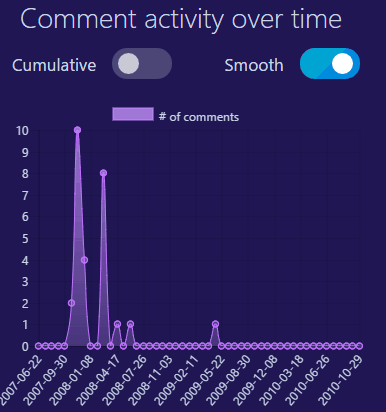 Scroll down the analytics page and you will see the best and worst comment of that Reddit user, as shown in the screenshot below. It categorizes the most upvoted comment of a Reddit user as the best comment and the most downvoted comment as the worst. Specifically, you can also see the exact number of upvotes and downvotes received by the best and worst Reddit comments of that user. 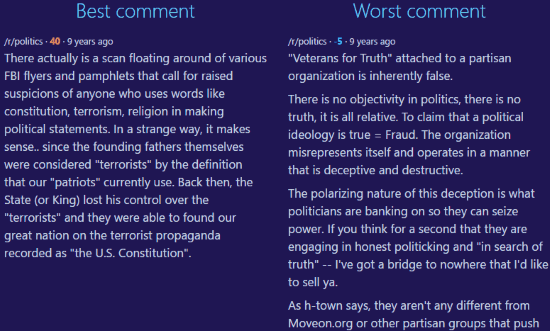 I found Reddit User Analyzer a pretty good and easy to use website to get a complete insight of a Reddit user. From it, you can check how much a specific Reddit user is active by analyzing the data metrics displayed by it. It displays the data in a very structured format and graphs which makes it pretty easy for any user to extract useful information about a Reddit user profile.