In this article, I’ll cover a free website that lets you translate image text to another language.

There are lots of text translators that are very accurate and can do the real-time translation. Some of them can also read text from real-world objects or photos and show you the translated text when you look at them through your smartphone. Google has Google Lens which is a rebranded version of Google Goggles with object detection and translation features. Microsoft has also launched an app that is capable of real-time image text translation. But what if you need the image with translated text say for reference or educational use? These apps are great at translation but you can not save the final image with them.

imgtranslate is an image translator web application that reads text from an image, translates the text to another selected language and renders the translated text back into the image. You can load an image with English text and convert the text to another language. Currently, this website can translate to 13 European and Asian Languages.

Also read: How To Translate Text In Notepad, Sticky Notes Using A Hotkey

How To Translate Image Text To Another Language?

In order to use this online image to image text translator, you have to create an account first. Currently, this tool is in the beta state which has a limit of only 100 Jobs (image translations). 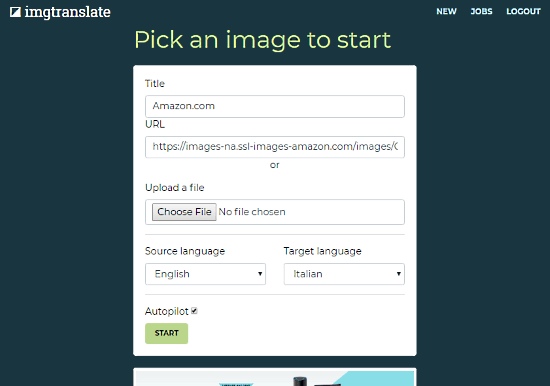 To translate the text of an image, you can enter the URL of the image or upload the image from your local storage. Once the image is loaded, it shows you a preview of the image. After that, type a title for the translation job and select the Target language. At the time being, this website can only detect the English language so currently that’s the only option under the Source language. But it can convert English text from the image to the following 13 languages: 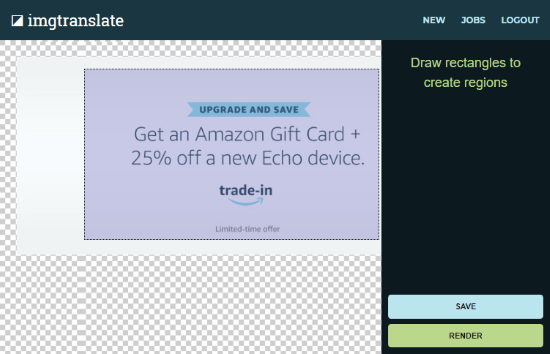 When you start the translation, the next step asks you to draw a rectangle over the text which you want to translate.  Simply drag the mouse cursor to create a region. When you draw the rectangle, it automatically saves the region and translates the text. If you want to translate text from the whole image, you can also go with the “Autopilot” option which automatically detects the text from the image.

In the output, this website shows you a popup with original text and translated text. It uses Google Translate API for translation. From here, click the Create button to view the translated text on the image. 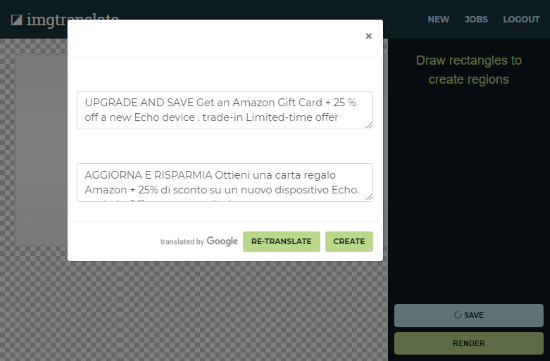 This will render the translated text on the original image. Depending on your image, it might overlap with the area that wasn’t the part of the selected region. But, you can reposition the text to make it look better. You can also change the text size and text alignment as well. From here, you can save translation job to your imgtranslate account. And, with the Render button, you can generate a rendering of the image with translated text and download it to your computer. 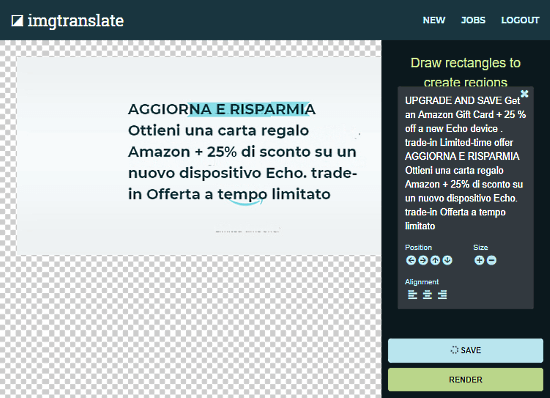 You can check out this image to image text translator here.

Imgtranslate is a handy tool to easily translate image text into another language and save the resulted image. As this tool is in beta state so, have some patience with it.